Are you old enough to be here?

CBD FOR FITNESS—TAKING YOUR GAME TO THE NEXT LEVEL

For decades cannabidiol (CBD) had been shunned as “the other cannabinoid” in cannabis, taking a back seat to its notorious cannabinoid companion tetrahydrocannabinol (THC). CBD doesn’t get you high, so it was relegated to the back burner by cannabis breeders who selectively manipulated their Sativa L strains for higher THC content.  THC most definitely produces a mental high with the psychoactive punch that has made the marijuana plant so popular throughout the ages. In the meantime, the hemp variety of the cannabis family was cultivated over the centuries as a sustainable source of fiber for paper, cordage, clothing, and textiles. Today the result is industrial hemp, a Sativa L cannabis strain which just happens to be rich in CBD content with minuscule trace levels of THC.

In the latter half of the 20th century, cannabis research pioneers such as the Israeli chemist Raphael Mechoulam began to unveil the enigmatic actions of both THC and CBD on the human brain, opening the door to the discovery of the endocannabinoid system (ECS). The ECS is a comprehensive biocommunication feedback network centered in the vital limbic and paralimbic regions of the brain. These regions regulate critical functions such as sleep, appetite, immune response, emotions, motor control, cognitive thought, memory, and pain tolerance, just to name a few.

As research continues to unravel the intricate network of the ECS which all mammals have, it’s becoming difficult to point to any physiological process in which the ECS doesn’t exert its influence. The mission of the ECS is to maintain a balanced mind and body, the process scientists call “homeostasis.” Athletes, yoga gurus, and fitness experts are all now turning to CBD to manipulate the ECS and achieve maximum results from their rigorous fitness regimens and workout routines. 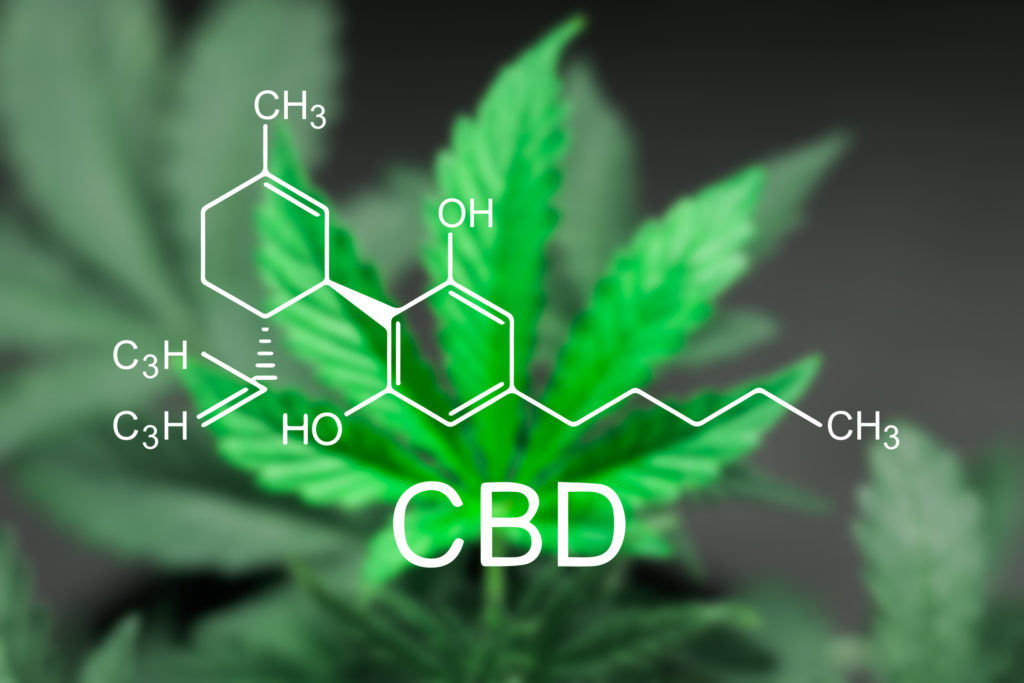 CBD has now emerged as the long sought after “magic ingredient” in cannabis. The benevolent non-psychoactive cannabinoid is responsible for a vast array of therapeutic benefits with an impressive arsenal of pharmacological actions. In 2018, U.S. federal law finally caught up to the science with the passage of the 2018 Farm Bill which legalized the hemp variety of cannabis with its abundant CBD content and less than .03% trace levels of THC. CBD from hemp (and only hemp) is now legal in all 50 states.

CBD attracts the majority of health consumers from the general public who seek to alleviate the symptoms of anxiety and stress, manage pain safely, enhance sleep, relieve chronic inflammatory conditions such as arthritis and joint pain, and improve mood and the overall sense of well being. CBD’s nontoxic, non-addictive nature makes it one of the safest substances in the household medicine cabinet. A wave of intense CBD research in preclinical studies on animals, as well as clinical studies with human subjects, has unveiled the diverse range of cannabidiol’s amazing therapeutic properties including:

Fitness professionals and athletes make up the other significant sector of the CBD market. They’re using the nonaddictive pharmacological potency of CBD not only to boost injury recovery to get back in the game, but to enhance performance in rigorous training and build muscles which allow them to compete at the highest competitive levels.

MMA (mixed martial arts) fighter Nate Diaz shocked the sports world in 2016 when he whipped out a vape pen full of CBD oil and began puffing away during a post-fight press conference. The unapologetic brawler had just finished a punishing championship bout with Conor MacGregor and explained to stunned reporters that CBD helped him throughout training, competition, and recovery. “It’s CBD,” said the bruised and cut Diaz, “It makes your life a better place.” In 2017, the pro-CBD movement among athletes launched by the Diaz interview eventually resulted in CBD’s removal from the forbidden substances lists at the WADA (World AntiDoping Agency) as well as the USADA, opening the door to legitimate CBD use for U.S. Olympic athletes as well.

Diaz has been joined in the swelling ranks of athletes endorsing CBD by Jiu-Jitsu fighter Pascal Pakter who turned to CBD after suffering a debilitating injury to two vertebrae from an intense weight training session. Pakter didn’t pull any punches saying, “I use CBD and CBD saved my life.” Pakter was taking up to 30 opioid pills per day to manage post-surgical recovery pain before turning to CBD for tolerance-free pain management without risking addiction or overdose.

NFL players are also seeking an alternative to addictive opioids and anti-inflammatory drugs to manage pain endured during and after their physically punishing careers. In a recent interview with the Washington Post, former Denver Bronco’s defensive end Ebenezer Ekuban said, “I think in due time, the NFL is going to realize that CBD is not a performance-enhancing drug. If anything, it helps with anxiety, helps with concentration, it helps with pain.”

Ebenezer Ekuban is referring to traditional PEDs (performance enhancing drugs) which some athletes have relied on to radically change their bodies in an effort to increase athletic performance. Anabolic steroid agents such as testosterone can increase muscle mass and enhance performance but those gains come at a high price. “Roid rage” is one of the most infamous side effects, but anabolic agents can also cause physical changes such as male pattern baldness, abnormal breast growth, and impotence in men. Women can experience a deepening of the voice, abnormal hair growth on the face, stomach and upper back, as well as menstrual disruptions.

CBD enhances workout performance by acting in harmony with the body’s own ECS to optimize fitness naturally. Muscle development and muscle recovery are the key elements to boosting stamina and maximizing the results of a robust fitness regimen. While anabolic hormones such as testosterone build muscle, catabolic hormones, especially cortisol cause a breakdown of muscle tissue. Cortisol levels fluctuate throughout the day, dropping to their lowest levels during sleep which is when muscle recovery occurs. Cortisol levels rise in response to stress, including the physical stress induced by a strenuous workout routine. CBD interferes with cortisol production and its calming anti-anxiety action enhances the deep sleep athletes need to get the most from their workout routines.

For decades we’ve all heard about the legendary “runner’s high,” the ultimate reward for a runner who has the stamina to run long enough to “get the endorphins jumping.” As it turns out, once again CBD is actually responsible. CBD increases levels of the natural mood-elevating endocannabinoid anandamide produced by the ECS, which is the true generator of the calm euphoria attained by running and other intense cardio-focused workouts.

CBD AS A DAILY ESSENTIAL SUPPLEMENT FOR YOUR FITNESS REGIMEN

For athletes at all levels, from Olympic gold medal contenders to the weekend warrior, CBD’s vast array of therapeutic actions can optimize the results of any serious fitness regimen. Its anti-catabolic properties enhance muscle development while increasing endurance. Its anti-anxiety action promotes calm for a rejuvenating night’s sleep, which is critical for muscle recovery.

CBD’s potent antioxidant and anti-inflammatory characteristics reduce joint and muscle pain. Moreover, its natural mood-elevating influence on the body’s anandamide levels can increase concentration and motivation, so you can stick to a demanding workout routine and take your game to the next level.